You are here: Home1 / About Us2 / Marcelo da Cunha e Souza Bio 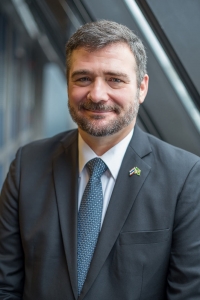 Marcelo has served as BTCC President since 2017.  As BTCC President, he represents the interests of BTCC member companies in Thailand and in Brazil. In order to fulfill his duties, he maintains close contact and a good working relationship with the Brazilian Embassy’s Trade Section and Agricultural Attaché. In addition, Marcelo represents BTCC member companies in his role as a Director at the Board of Trade of Thailand (BoT).  BoT represents 100,000 Thai and foreign companies of all sizes and industries operating in Thailand.  At BoT, Marcelo defends the interests of the Brazilian and Thai private sectors by working closely with Brazilian trade associations and individual Brazilian and Thai companies, and by advocating their needs through the proper channels at the Royal Thai Government and Thai trade organizations. Through BoT, Marcelo strives to contribute to the development of the Thai economy and its international commercial relations by presenting the points of view of the Thai and expat business communities, crafted to improve rules and regulations in order to make Thailand a more efficient and attractive environment for foreign investment in Asia.

In Thailand, he is the owner of Field Gemologist International, a company that serves the supply chain of gemstones from Thailand to jewelry manufacturers worldwide.  Prior to pursuing the entrepreneur route, he worked for Tiffany & Co.’s Diamond Division in Gemstone Acquisition for more than a decade, serving Tiffany’s supply chain of rough diamonds and colored gemstones in Africa and Asia.

After obtaining his Master’s Degree in International Business from the University of Arizona in the mid-1990’s, Marcelo worked for Brazilian credit card company Credicard in São Paulo, Brazil, first as product development director and then as relationship director with international brands Mastercard and Visa.  After Credicard, Marcelo worked as an international sales director for start-up e-learning companies in Los Angeles during the “dot com” boom of the late 1990’s and early 2000’s.